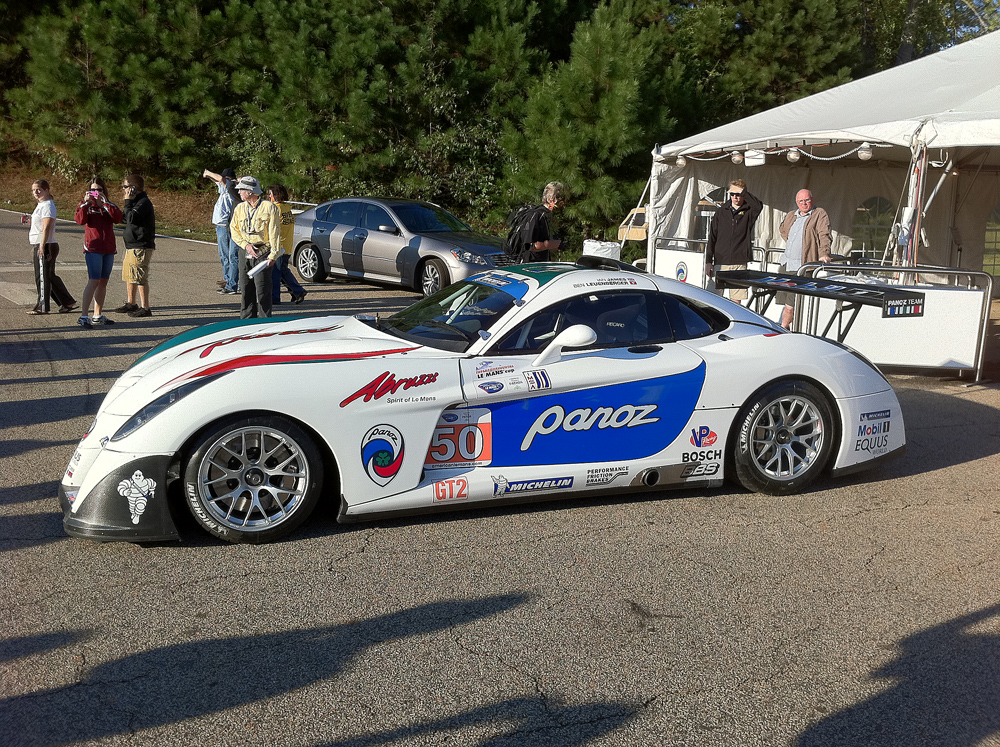 Testing program for Abruzzi ‚Spirit of Le Mans‘ is under way

HOSCHTON, Ga. – Five years after it last tasted victory in America’s greatest sports car race, Panoz will return to the Sebring 12 Hours in force with the new Abruzzi “Spirit of Le Mans”. The racing version of Panoz Auto Development Company’s newest road-going supercar recently started its offseason test program in advance of its competition debut in the 59th Mobil 1 Twelve Hours of Sebring presented by Fresh from Florida.

The Panoz brand first tasted victory in class at Sebring in 1998 with the Panoz GTR-1 and again in 2006 with the Esperante GTLM. The latter spurred the marque toward its first win at the 24 Hours of Le Mans in the same year.

“The Sebring 12 Hours has long been considered the litmus test for any racing team and car heading to the 24 Hour of Le Mans,” said Don Panoz, founder of Panoz Motor Sports Group. “The demanding nature of Sebring is the perfect platform for the final evaluation of our development program. Furthermore, it makes sense now that the car’s first race shall be the first race of the 2011 American Le Mans Series, and on such hallowed ground as Sebring.”

The Abruzzi “Spirit of Le Mans” race car is being prepped by Tom Milner’s Prototype Technology Group, a past champion in the American Le Mans Series presented by Tequila Patrón. Ian James, the Series’ 2004 LMP2 champion, and Benjamin Leuenberger will drive the Panoz Team entry in the GT class during the 2011 championship.

Panoz and PTG had hoped to race the car at Petit Le Mans powered by MAZDA 2 earlier this month at Road Atlanta. It did turn a processional lap prior to the annual 1,000-mile/10-hour event and was the centerpiece of the Panoz display in the main paddock. The Abruzzi “Spirit of the Le Mans” racer and its road-going counterpart sat alongside the Panoz GTR-1, LMP-01 prototype and the Esperante street car in a Panoz family tree.

“It was extremely important for us to unveil the Panoz Abruzzi ‘Spirit of Le Mans’ at Petit Le Mans,” Panoz said. “I’m glad we could give the fans what they wanted – a glimpse of the new car. There was so much anticipation with so much support for Panoz out there, and particularly here in Braselton as the factory is just down the road. While we had planned on running in Petit Le Mans as an unclassified entry, we had not done any real testing and did not want to take a chance on adversely affecting the other teams with championship hopes. Hence we decided to do only the pace lap.

“Everyone – from PTG, Panoz Auto Development and Élan Technologies to all of our suppliers and partners – worked tirelessly to have a completed, operating racing car for the unveiling at Petit Le Mans and their efforts were absolutely rewarded,” Panoz added. “The response to the Abruzzi ‘Spirit of Le Mans’, both from the fans and within the industry has been overwhelming and everyone involved should be very proud of what they have achieved.

“It was fantastic too, to be able to have the lineage of the Abruzzi ‘Spirit of Le Mans’ on display. The Abruzzi not only pays homage to a time when racers would literally drive their own cars to compete in Le Mans, but the highly successful race- and championship-winning history of Panoz.”

The Abruzzi “Spirit of Le Mans” is set to carry on a successful history of Panoz is motorsport. With 10 class victories – including eight overall – in the American Le Mans Series and the 2002 Trans-Am championship, the manufacturer is one of the most renowned in the world. In addition to winning at Sebring and Le Mans, Panoz has won at such venues as Road Atlanta, the Nürburgring and Washington DC.

“With the Road Atlanta unveiling out the way we are concentrating on a full development program to ready the car for its race debut at Sebring next year,” Panoz said. “With a solid winter’s testing behind it I’m expecting the ‘Spirit of Le Mans’ to be well and truly haunting the GT2 field at Sebring.”

Abruzzi: The Automobile
The Abruzzi “Spirit of Le Mans” is a unique, front-engine, rear-transaxle and rear-radiator super sports car – road-legal in Europe and many countries of Asia, the Middle East and South America. It is powered by a V8 engine producing 640 HP @ 6500 rpm / 477 KW and 600 + ft lbs of torque at 3800 rpm/ 821 nm. Its styling is inspired by automobiles like the 1935 Delahaye and born of a pre-war era of classic streamlining.

In addition to its unique aerodynamic styling and its impressive power and torque, a number of technical advancements will be pioneered and proven on the Abruzzi – “Spirit of Le Mans”. It breaks new ground in environmental design and construction represented by the Recyclable Energy Absorbing Matrix System body system. R.E.A.M.S.® offers environmental, performance and structural advantages like no other automobile body system on the planet. Never used before on any road-going automobile, the multi-layer composite system is lighter than carbon fiber yet equally strong. Unlike carbon fiber however, it is dent-resistant, shatter-proof and recyclable.

Abruzzi also introduces TRIFECTACOOLING® technology. In addition to a normal high-efficiency radiator, there are stage two and stage three systems that lower coolant temperature on both the inflow to and the outflow from the radiator.