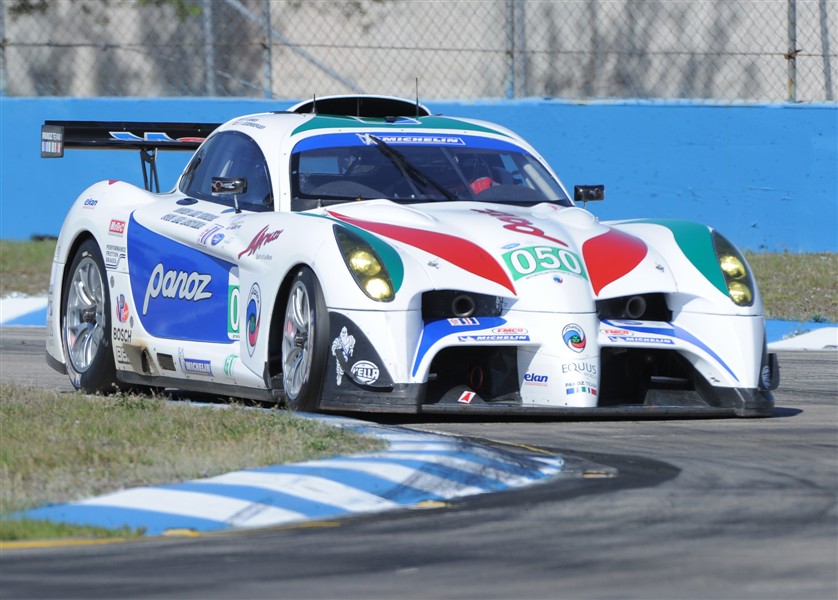 For the first time in eight years, Benjamin Leuenberger (28) was back behind the steering wheel of a Panoz. At last weekend’s 12 hours of Sebring, America’s oldest endurance race, the new Panoz Abruzzi „Spirit of Le Mans“, driven by Ben Leuenberger, started into it’s very first race. Although the Panoz didn’t made it until the end of its maiden race, Leuenbergers resume was optimistic: „The Panoz has great potential.“

The 12 hours of Sebring, season opener of the American Le Mans Series, is considered as one of the hardest endurance races in the world. At some parts of the tracks, cars are running on old and very bumpy concrete from WW2 times. Not necessarily a track one would consider ideal for the debut race of an all-new car. But during tests and free practise earlier in the week, the Panoz was quickly up to speed and reliable. „The driveability of the car is really good“, Leuenberger reported after his first laps. „Out of the box, lap times were encouraging and in most of the sessions, the Panoz Racing prepared Abruzzi was in the middle of the pack in the GTE-class, which is considered as the toughest class in ALMS-competition“, Leuenberger explained. „For the entire team, Sebring was more a test then a race. But it went really well, considered the all new racecar arrived at Sebring only one week before the race and was merely untested.”

During the race, the Panoz crew had bad luck. Problems with the paddle shift were followed by a defect in the motor compartment, which eventually resulted in a retirement. „That was really a pity, as we had an almost trouble free practise, but then problems started early in the race“, Leuenberger said. „But I think we proofed that the Panoz has potential and just needs some development work now.“

The next month will therefore see a development and testing program. „Maybe we will skip the next ALMS round in April and concentrate on the development of the car. The impressions and experience we gathered at Sebring were very encouraging.“